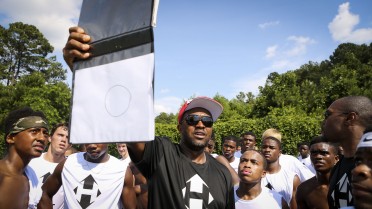 When we were kids, we played football in the yard…well, pretty much anywhere there was room to toss and catch a ball. That’s where Terrence and I got our start. We were always goofing around, saying we were going to be these famous football players. But that’s where dreams begin. We see kids at our Holt Brothers Football Camp with the same dreams that we had. That inspires us to inspire them.

We’ve done a camp in Gibsonville, our hometown, for 15 years. And we started the camp in Raleigh three years ago. We wanted to pass on what we learned to the kids, kind of like bringing the NFL to North Carolina. Learning from players who have been through Pop Warner all the way to the NFL makes our camp unique, players like Isaac Bruce, Corey Chavous, London Fletcher and Tiquan Underwood — all of whom come to our camp and teach our kids. These guys want to give back and do so by teaching the fundamentals of success on and off the field. Whether it’s teaching a drill or a life lesson, we all bring the same energy to this camp as we did when we played under the stadium lights.

Speaking of energy — the kids bring it. This year’s camp included 350 children. That’s a lot of energy. For four hours they were running drills, playing 7 on 7, asking questions and kicking butt. There was even some hula hooping (it helps with flexibility, I promise). All the while, smiles on their faces. This energy, camaraderie and excitement for the game is what makes it all worth it. The best part is seeing kids who have been at camp before. Seeing their growth energizes me and my brother. It is clear they are listening and applying the knowledge.

I always like to say, “What you put in is what you get out.” Well, after a lot of hard work, this year’s camp set the bar high. As we continue to grow the Holt Brothers Football Camp for generations to come, it will take a lot of work and support. Thanks to these inspiring kids, we’re energized and ready for it. See you at next year’s camp.

(By the way, we don’t do this alone. We get help from area high school coaches, volunteers from Camp Kesem and our corporate sponsors. Thanks to Rex Healthcare, Moe’s Southwest Grill, Crabtree Valley Mall and the St. Louis Rams, we were able to underwrite scholarships that allowed children from the Boys & Girls Clubs and the YMCA to attend. Peace. And thank you.)