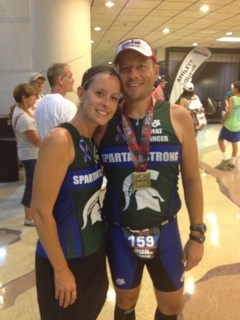 Ryan Switzer is some kind of guy. In July 2012, he was diagnosed with colon cancer. Yet, just last week, the 37-year-old from Raleigh participated in the IRONMAN competition in Louisville, KY.  He also raised $5,000 for the Holt Brothers Foundation through his IRONMAN fundraising page.

Ryan said his youngest daughter, who is 8, still has difficulty talking about cancer and is fearful. “I was coughing the other day and she asked me if I was okay,” he said. “She worrries whether she can catch cancer by hugging other people. We’re working with her and the KidsCan! program is a big help.”

Ryan went through chemotherapy and radiation treatment and has had several surgeries. He’s going back into the hospital for another surgery in a few weeks. He’s positive, upbeat, and optimistic about the future.

His story is an inspiration and it’s why my brother Terrence and I give back to the community through our Foundation. We want to help families like Ryan’s. Talk about someone who deserves hero status. He’s the man in my book.